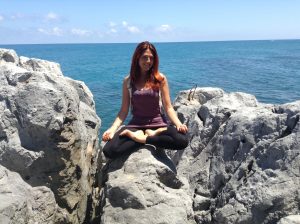 My name is Francesca, I practice and teach ashtanga and yin yoga, because I think and feel that it is the perfect balance!!
I come from Sicily, Italy, I m 38 years old.
I moved at the age of 18 years old in Rome, where I graduated as translator, french and english languages.
I started to practice yoga very young, since I was attracted by everything concerning natural and healthy life.
After I graduated as translator I studied for three years herbal medicine and how to prepare natural remedies and cosmetics.
In Rome I practiced ashtanga yoga in Lino’s Miele school, and I went also in Kerala to study with him.
In 2010 I moved to Dubai where I worked as flight attendant for Emirates airlines, but I have never stopped practicing ashtanga, the yoga mat always in my suitcase!!
I started to trasmit ashtanga and yin yoga in Dubai and I m still doing it….
Thanks to this job I met and practiced with many teacher around the world, like Dylan Benstein, Iain Grysak, Kathy Cooper, Mark Robberts, Balu Thevar, Manju Jois (with who I completed 25 hours first series yoga chikitsa), Kamal Singh…
After I decided to resign and I moved to Koh Phangan to teach yoga in Orion healing center, then I went in North Thailand where I studied thai massage in Lahu village, after that I decided to deepen my practice and I went to study in Rishikesh with Kamal Singh where I completed 200 hours TTC in ashtanga yoga (now completing 300 hours in Italy).